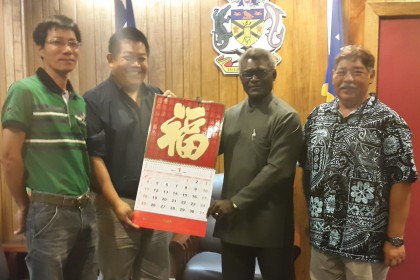 The Solomon Islands Chinese Association has assured the Sogavare-led Government of its cooperation with the state in ensuring Chinese living in Solomon Islands and those coming into the country do what is right.

President of the Solomon Islands Chinese Association Mr Matthew Quan made the assurance when executives of the association met Prime Minister Hon Manasseh Sogavare this week.

Mr Quan congratulated Hon Sogavare for his election as Prime Minister and told him, appropriate issues concerning Chinese in the country will be addressed by his association.

He says, his association also works closely with the Chinese Embassy in Papua New Guinea and has requested the diplomatic mission to thoroughly scrutinise Chinese investors wanting to come to Solomon Islands before granting them visas.

The kind of investors who will also work for the benefit of Solomon Islanders other than their own.

Mr Quan also informed the Prime Minister of a 17 member team from the Guangdong Province of the People’s Republic of China visiting Solomon Islands next month on a friendship visit.

However, in his response, Prime Minister Manasseh Sogavare thanked the Solomon Islands Chinese Association for their well wishes and welcomed the announcement of the PRC delegation visit to Solomon Islands.