The Sol2023 Pacific Games Organizing Committee (GOC) will be looking at lifting the standard of Security Firms in the Solomon Islands as part of preparations to host the Pacific region’s biggest sporting event in Honiara in 2023. 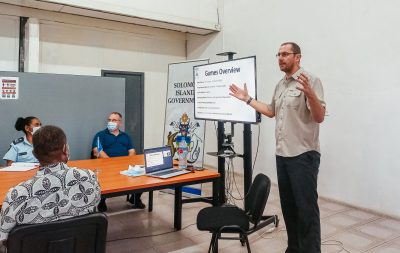 Senior Manager Venues and Operations, Jack Smith delivering his presentation on the Games Security Services to representatives of local Security Firms in Honiara.

An Expression of Interest (EOI) is current for local businesses interested in providing security services for the 2023 Pacific Games with support of the Royal Solomon Islands Police Force (RSIPF).

“Working with the Pacific Games will definitely lift the quality of guards and services provided by local firms and, from the Games Organizing Committee’s perspective, we will be looking to provide training to these Firms of an industry standard comparable to that delivered anywhere in the World for an event such as this.” GOC’s Chief Executive Officer, Peter Stewart, said.

The Organizing Committee on Wednesday 15th March, 2022 also hosted an Information Session to present to interested Security Firms the scope of work and requirements for the 2023 Pacific Games from a security point of view.

Senior Manager Venues and Operations, Mr. Jack Smith said the purpose of reaching out to local Firms through the EOI is for the Organizing Committee to identify the businesses interested in providing the security services and their current and future capacity. 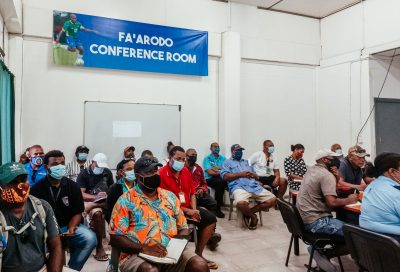 The 2023 Pacific Games Security Services will be in four categories including Access Control, Asset Protection, Traffic Management and Public Safety.

“The 2023 Pacific Games will be the largest event in Solomon Islands history which will feature athletes from 24 Pacific Island countries competing in 24 sports across Honiara and the surrounding area.

“In order to protect all clients within the Games properties, the Organizing Committee will engage private contractor security companies to provide services in addition to the local Police Force,” said Mr. Smith.

Assistant Commissioner of Police, Ms. Evelyn Thugea, who is the Board Member of the Games Organizing Committee who is responsible for Security Services at the Games, said: “It is important that arrangements be in place so that we have an effective and coordinated Security system and services in place to protect our visitors, VIPs as well as our own citizens in the country, who come for the Games.”

ACP Thugea had earlier stated that the Police work force will be boosted to ensure a safe and free Games where people and families enjoy the Games as well as its related activities.