A number of Solomon Airlines staff would be losing their jobs as the national flag carrier is facing a grim financial outlook forcing it to seek cost-cutting measures.
Speaking to SIBC news, Solomon Airlines Chief Executive Officer (CEO) Brett Gebers said the country’s domestic travel ban as a result of Covid-19 Community Transmission has affected the airlines income, and once again forced the airline to re-look at its staff numbers as one of its cost cutting measures. 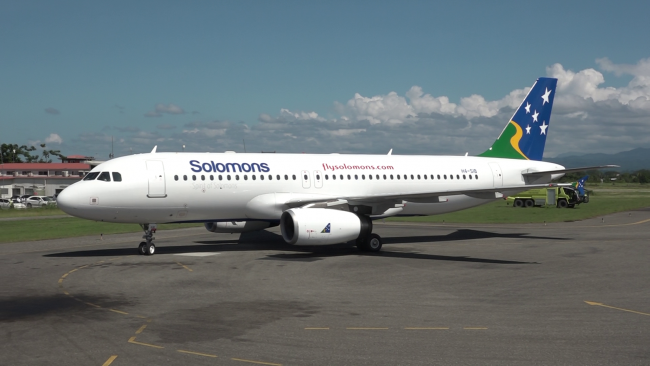 “At the moment we cannot continue to operate with the full complement of the staff if we cannot generate income to support them so we have no choice but to review the full staff numbers over the next few weeks,” Mr Gebers said.
Currently all staff salaries are being paid in full with the exception of Mr. Gebers salary which he has forgone personally in efforts to reduce the airline’s costs following closure of the country’s international border in March 2020.

Last year the airline has seen a 20 percent pay cut across the border for all staff salaries in measures to reduce the airline costs.
Despite the need to review staff roles at the airline, Mr Gebers said the complexity of the staff needed by the airline makes it a challenging one.
“If you take one person out of the business then that work has to be done by someone else, so it’s not a simple case of saying we are going to reduce staff by 20 percent, we would have to work really hard on who is not required. Also, at the moment, all the staff in place are absolutely essential,” Mr Gebers said.
He also adds laying off current staff would make it hard for the airline to hire qualified people needed for the job in the long term.
“If we lay off staff, it is difficult for the airline to hire and train new staff immediately when things improve, so we’re actually stuck in a situation where we actually need to look after our staff because when business improves, we’re going to need them.”
Mr Gebers said laying off staff is not part of his plan, and is the last thing he wants to do, but given the difficult circumstances, he has no choice but to review the whole airline operations with an aim to lessen the airlines expenses.
He said the situation presented by the Covid-19 has been one of the most difficult challenges faced yet.
“It is difficult to work in an environment where all the laws prevent you from doing what you would normally do in commercial circumstances.
“Airlines are set up to fly cargo and people between places and when travel restrictions come along and you are no longer allowed to do what you’re supposed to do, you have to reinvent the organization.
“Everybody keeps saying “don’t worry Covid-19 will go away as we approach the middle of 2020, but we realized it is going to be another year before the borders open and here we are now,” the airlines CEO expressed.
Mr. Gebers said the war between Russia and Ukraine has now added more problems to the industry as it has pushed the price of oil to increase at an alarming rate causing the price of fuel in the country to go up.
“In addition to the increase in fuel price, I just had a meeting with insurance companies. The rate is going through the roof due to the aircrafts stuck in Russia and leasing companies cannot get them out,” he adds.
Yesterday, SIBC News reported that the airline loses 50 percent of its annual monthly income following the domestic travel ban.
Despite the airline’s grim outlook, Mr Gebers is optimistic the airline will survive the Covid-19 pandemic.
“Solomon Airlines has been in operation since 1965 in one form or another, and we have always found a way to pay our bills. We have always continued in business despite the fact that we’ve had the tension years and other issues that have come along the way,” he furthers.
Gebers reiterated he is quite confident the airlines will get through.
“This airline may look different but it will still be in operation.”
SIBC News understands that the airline has resumed its domestic travel after the National Government lifted the restriction last week. The Iumi Tugeda Holiday initiative is gaining momentum with packages being sold out to the Public Service for a particular resort in East Guadalcanal. Solomon ... Read More