The national carrier has paid a heartfelt tribute to the late Colin Sigimanu, Manager Commercial for Solomon Airlines, who passed away suddenly overnight, on 21st February 2022. 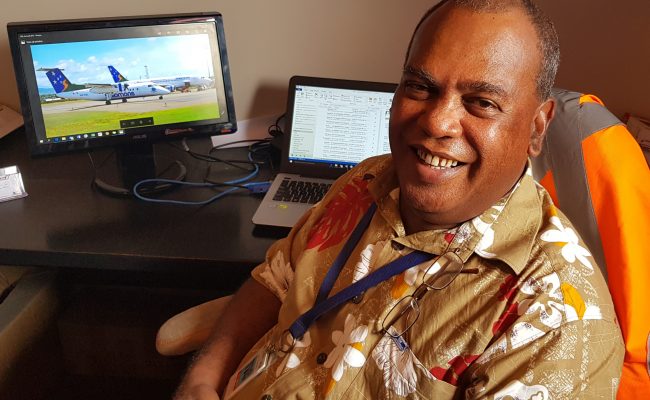 “The Board of Directors, management and staff of Solomon Airlines Limited, are deeply saddened and shocked on the sudden passing of our much loved and respected colleague,” the airline said.

“We send our sincerest condolences to Colin’s wife Ethel, son Eugene and daughters Hernandia, Ngirisi, Joana and Ruth, and to their extended family and friends.”

Colin Sigimanu had served the airline with pride for over 30 years, moving successfully through commercial and operational management roles after joining Solomon Airlines on 6th of February 1989, as a graduate of University of the South Pacific.

He started his aviation career as a Management Cadet within Solomon Airlines’ Commercial Department.

By 1997, he was appointed to the position of Human Resources Manager, and later moved to operations as Traffic & Cargo Manager from 2003.

Two years later he was appointed Marketing Manager for Solomon Airlines, a role he retained until resigning from the company in 2010 to contest in the National General Elections.

Between 2012 and 2015 Mr Sigimanu worked as a consultant to the national carrier before rejoining the airline’s management team as Manager Commercial from 2016 until 2022.

“We are all deeply shocked and saddened to lose our beloved friend and colleague, but also an extraordinary leader within the Solomon Islands,” said Brett Gebers CEO of Solomon Airlines. “Colin will be very greatly missed, at our airline and in our industry, for his leadership, experience and commitment to Solomon Airlines, and as an exceptional contributor to our nation. “Though we have lost the in-depth airline knowledge and skills that he carried, it is his capacity for understanding, positivity and encouragement, generously shared with all he came into contact with, that we will miss the most,” he said.

“Our prayers and thoughts are first and foremost with Colin’s wife Ethel, with our colleague Hernandia, her brother and sisters at this very sad time.”

Honiara International Airport. The national government is planning on putting all airports in the country under commercial management by the end of this year. This ... Read More

The Solomon Airlines CEO Captain Ron Sumsum. Photo credit: www.eglobaltravelmedia.com.au The Government, through the Ministry of Finance and Treasury as Ministry accountable and responsible for ... Read More

A number of Solomon Airlines staff would be losing their jobs as the national flag carrier is facing a grim financial outlook forcing it to ... Read More