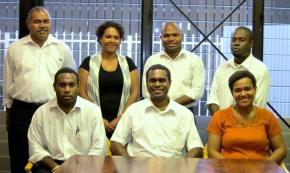 The Acting Registrar of the High Court Mayonni Samani confirmed towards the end of last year, the Association elected Katalaini Ziru as President and Silverio Otuana from private law firm Sol-Law as Vice-president.

The new Secretary is Jasper Anisi from the Director of Public Prosecutions and treasurer, Constance Hemmer.

The Solomon Islands Bar Association regulates the professional and ethical conducts of legal practitioners in the country.

Court mallet. Photo credit: SIBC. A key witness to a murder-drowning committed in 2010 was cross-examined in Court this morning. The witness is claiming to ... Read More

TOVOSIA AND VEKE IN COURT FOR MENTION

NEWER POSTH.C.C HOPES TO ACHIEVE SOME PRIORITIES IN NEXT 100 DAYS
OLDER POSTBOND UNIVERSITY STUDENTS IN SOLOMON ISLANDS TO DO RESEARCH