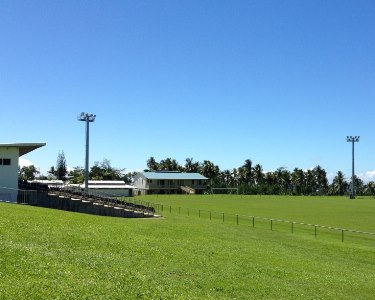 The J.S.Blatter Complex MAs where the game will be played. Photo credit: SIFF.

Solomon Islands under 17 team will play its opening match against Tonga tomorrow at 1pm Solomon time at the Pago stadium.

The young national side will be led by Captain Junior Hou.

Team manager Mr Donald Marahare told SIBC Sports from American Samoa, the boys are on top of their preparation schedule for the first match.

The team will meet Vanuatu on Sunday’s showdown.

The Under 17 national side will dig deep in their final pool match against American Samoa on the 21st of January as the later banks on home ground support.

Solomon Islands is grouped alongside American Samoa, Tahiti, Vanuatu and Tonga in Pool B.

Considered the pool of death, Pool A will play their matches in Apia, Samoa.