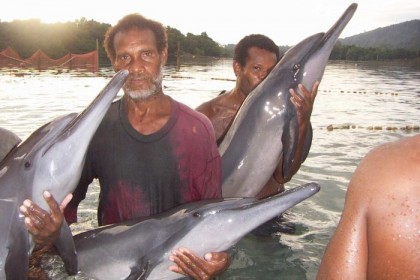 Traditional dolphin hunts in the Solomon Islands are among the world’s largest.

PACNEWS reports the journal Royal Society Open Science in the US have found in Fanalei village, on the island of South Malaita, recorded an overall tally of 15,400 dolphins killed between 1976 to 2013.

The dolphins are mainly killed for their teeth, a local currency often used to pay dowries for brides and for ceremonial jewellery.

Despite recent attempts from environmentalists and government to deal with the practice, local dolphin hunters continue to kill more dolphins as the local price of a dolphin tooth rose from the equivalent of 14 US cents in 2004 to about 70 US cents in 2013.

The report warns the current increasing commercial value of teeth highlight an urgent need to monitor hunts and assess the abundance and trends in local populations.

NEWER POSTWEST PAPUA HAVE RIGHT TO BE PART OF M.S.G
OLDER POSTS.I.E.A INVITES CONTRACTORS TO DO STREET LIGHTS