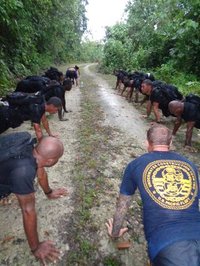 The U.S. Ambassador to Papua New Guinea, Vanuatu and Solomon Islands Walter North has donated equipment valued at about $200,000 Solomon Islands for use in unexploded ordnance (UXO) recovery.

A statement from the U.S. Embassy in Port Moresby said Ambassador North donated the equipment at the graduation ceremony of the Royal Solomon Islands Police Force (RSIPF) Explosive Ordnance Disposal Unit this week.

The U.S. Ambassador joined members of the U.S. military and NGO partner Golden West Humanitarian Foundation at the event.

Ambassador North praised the RSIPF and U.S. military divers for their teamwork in this important endeavor.

He said the United States values its longstanding relationship with the Solomon Islands and appreciates the efforts of the RSIPF in rehabilitating the contaminated areas.

Mortars, grenades, and other combustible materials are hazards to villages, waterways and to future development.

Meanwhile, some of these materials have been used as “fish bombs” to the detriment of the marine environment.

The statement said the United States has provided more than $1.8 million to support explosive ordnance disposal (EOD) and clearance in Solomon Islands since 2011.

This was also to build the capacity of the RSIPF to facilitate the detection and removal of potentially harmful ordnance.

The RSIPF has since disposed of over 25,000 UXO items and has supported public safety calls to decommission UXO in communities.

During the current training on the Underwater Detection System, the RSIPF operators discovered three aircraft in less than six hours and it is believed there are more aircraft in the waters around Guadalcanal.

The new Underwater Detection equipment will allow the RSIPF to use sonar and other systems to identify and recover unexploded ordnance more accurately.