The Leader of Opposition must stop living in the world of denial, he should acknowledge the hard work done by government this far in terms of keeping the economy afloat.

In a statement tonight, the Government says the Leader of Opposition honorable Matthew Wale is either too ignorant or too proud to see that government has been taking the lead to resuscitate and keep the economy up and running despite of the COVID- 19. 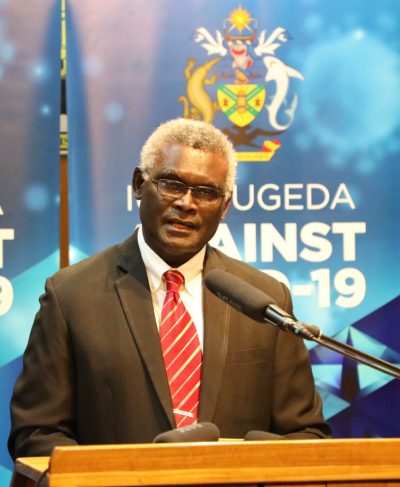 Around the world governments are struggling to come to terms with the negative impact of COVID- 19 and Solomon Islands is no different.

At the proclamation of COVID- 19 pandemic by World Health Organization (WHO) in 2020, government stepped up in cushioning the likely negative impact of COVID- 19 on the local economy.

Government introduced the redirection policy where the overarching policies were to strengthen our health capabilities to contain and eliminate COVID- 19 in the quarantine centers and keeping our economy afloat.

On the economic front, government continued to invest on strategic sectors and introduced the Economic Stimulus Package (ESP) to prevent the economy from further deteriorating by maintaining aggregate demand in the economy.

In a media conference of late, the Permanent Secretary of Ministry of Finance and Treasury Mckinnie Dentana revealed that the ESP has been proven to be a success at its implementation.

Dentana said this is demonstrated in the improved economic growth projection to negative 3.5% from the earlier projection of negative 4.5% prior to the ESP.

The economy does hold up albeit the negative growth, it would have been worse if ESP was never introduced.

The economic impact of Pacific Games in which the PM made reference to in his national address was taken out of context by Wale obviously for his own political agenda.

PM never stated that PG23 is the mainstay of the economy nor he made statement to the effect that the PG23 will have a long term economic impact on the country’s economy.

PM was defending the timeframe in which the games is to take place and its importance to the economy in terms of employment and infrastructures development that as a country we stand to benefit from.

Wale intentionally plucked out only that part of the PM’s national address to distort the facts, as a learned person he should have read the PM’s speech in its entirety to understand the context at which the PM is getting at in reference to the benefits of PG2023 .

The recent revitalization and recapitalization seven years’ strategy aimed at repositioning Commodities Export Marketing Authority (CEMA) to effectively manage and sustain cocoa and copra, goes to show government’s seriousness in resurrecting and maintaining the productivity of these two mainstay commodities of our economy.

The revitalization and recapitalization of CEMA account for $77m of government’s finance over a seven-year period during which CEMA is expected to boost the production of cocoa and copra.

Understandably, and again Wale cannot acknowledge this as he is too consumed by his hunger for power.

With Wale obviously lusting for power, government urged people not to be misled by Wale’s emotionally charged outbursts.

Government calls on the public to be wary of propaganda being spewed out as Wale’s only motive is to tarnish government’s reputation to satisfy his self- promoted image of being ‘the knowledgeable one’ yet he has nothing to show from his political career even for the benefit of Auki/Langalanga Constituency, he has never proven himself as a trustworthy or competent national leader.

With the full reopening of international borders on July 1, normal clearance functions on foreign vessels and aircrafts imposed during the covid-19 period will return ... Read More