War is a Racket and the Western Media: Ukraine and Russia: (A Pacific perspective) 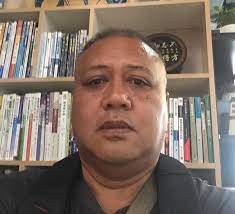 Author, Setope So’oa’emalelagi is a Samoan scholar who holds a BA Hons in political science from Victoria University New Zealand and currently writes about South Pacific regional issues as well as lecture in Samoan language and culture in Asia

“In a chapel somewhere in this crazy world – there are empty pews – twisted religious iconography in piles of smoldering debris – Every rose stained glass window has been blown out – the floor is covered in fragments like rubies set to a black milky way – an
orthodox priest kneels at the alter mumbling an eerie ancient chant while clutching a thin book to his chest – The chapel took a direct hit – a gaping hole in the corrugated iron roof allows a soft stream of light to fall on the kneeling priest – a young man approaches the priest – “Sir please sir we must leave “ – the priest doesn’t bother to greet the nervous half Russian half Ukrainian shepherd turned soldier and replies stoically “Go my son – leave without me- I have no place to go other than to God” – the young soldier obeys by taking a few backward steps – but not before the priest calls out “please son take this book and get the world to read it” – Puzzled the soldier takes the book and kisses the kneeling priest on the forehead – he walks outside of what remains of a brutally charred skeleton of a chapel and says to himself out loud…”Another book of psalms ?…my lucky day – I got ten at home !” It was an odd-looking book of psalms – a picture of an old man in military uniform on the cover – no clear insignia – definitely not Russian or Ukrainian military and then he sees the title ….” War is a racket” by US General Smedley Butler.” – (author anonymous)

The story above serves as a backdrop to questions raised in this article- simple but telling questions like do people in Ukraine or Russia understand anything about the people and cultures in the southern hemisphere? Do they realize that Australia and New Zealand are sometimes considered pacific Islands? Similarly ask yourself – how many pacific Islanders have ever heard of Kiev? Do they know that Russia and Ukraine are joined at the hip culturally, historically, linguistically, and mythically?

The answer is probably no – yet we start here because all societies have a history of war – it’s basically something humanity knows a lot about – the battle of Guadalcanal in WW2 Solomon Islands – the Independence wars of the Mau 1929 Samoa – and now this war in Ukraine – it’s been raging since 2014 in the eastern provinces of Donetsk and Luhansk. Russian soldiers reportedly now patrol suburbs and streets of Kyiv.

What I hope to show is that in the pacific we blindly accept whatever version of events is presented by western media and therefore – a ‘moral’ crisis develops in some quarters of the media over how we discuss – uncover and investigate conflicts closer to home such as West Papua.

If you were to correlate pretty much all wars beginning from Vietnam to Ukraine – a common theme pops up – empirical evidence provides a strong case that ‘certain’ wars are a racket a scam and that the media is the cheerleader. Hence, my ‘pacific’ views on war remain influenced by this philosophy –war is essentially futile – war is a racket (in some cases) and in the interests of national security –war is probably a necessity.

Western media reporting in the South Pacific is let’s say ‘manufactured’ – patronizing and ‘red, white and blue -demonstrated by US dictums on what’s good for the free world -For example New Zealand and Australia governments acquiescence to American foreign policy – from the invasion of Afghanistan in 2001 and Iraq in 2003 to the capitulation and humiliating retreat from Afghanistan in 2021- (US Three Trillion Dollars later).

Sadly the ‘Pacific’ way of looking at the world is pretty much defined by what New Zealand and Australia deems as important in foreign affairs and what is good for the region. It also follows that the western media narrative has become the accepted gospel in the south pacific. – ‘the US is the good empire whereas Russia and China are the evil empires.

To break this cycle – and ludicrous perception of the world – pacific island writers and intellectuals can thank CEO and the Editor-in-Chief of the Solomon Islands Broadcasting Corporation (SIBC), Voice of the Nation, Johnson Honimae – a visionary in pacific media circles- for his news service – we can discuss regional issues like climate change and fake science – debunking western myths about the rise of China and the Indonesian occupation of West Papua.

But if we sit and drink kava silently – I’m afraid we become complicit in allowing issues like West Papua vanish – their struggle is no
different to our ancestor’s struggle against -colonialism – oppression – subjugation and decimation of language – history, culture, and way of life.

And finally, back to war – back to Russia and Ukraine and the causes of this conflict – and what lessons Pacific Islanders can learn from this conflict? It’s complicated – it’s messy and in the words of Prof John Mearsheimer distinguished and respected lecturer in political science at Chicago University USA: … “The United States and its allies are responsible for the war in Ukraine and here are the three key elements of US policy, NATO and Europe that triggered this war and how seriously Russia perceives this as a direct attack on its national interests in the region”

1. Since 2008 the west led by USA and backed by NATO have been trying to convert Ukraine into a western bulwark against Russia and encircle Russia on its own borders.

2. Expand NATO – include Georgia and any other Russian autonomous state on its borders in the EU. At the NATO conference in Bucharest of 2008 – It was here that NATO’s strategic plan was announced with a bold claim to convert Ukraine and Georgia into liberal democracies like England and the US.

3. Support and fund any local movements like the ‘orange revolution’ in Ukraine to overthrow or destabilize governments friendly to Russia.

The hubris of western policy to expect a nation like Russia with its military power and history to roll over and become a second-class potato farmer is quite astonishing. Obviously, this isn’t the prevailing view broadcast 24 hours – seven days a week – 356 days a year on Fox TV, CNN, ABC, Sky News, and on Facebook and twitter – quite the contrary – It’s all about ‘identity politics’ – ‘Putin is Hitler reincarnate’– ‘he’s a danger to the survival of the human species’ – ‘he is the architect of doom in Europe’ and so on.

And to conclude by revisiting war seriously this last time …what do you think Russia’s response would be in this crisis? –if you are looking at nuclear missiles on your border pointing at every city in Russia? What if Russia was to build a city the size of St Petersburg on the US-Canadian border and place nuclear tipped missiles on every street corner? What would you think?…….exactly what I think

Disclaimer: The views expressed in this article are that of the author alone. As a media organisation, SIBC does not take any sides in any issues but only provides information to enable an informed discussion on issues that affect our livelihood and the world at large