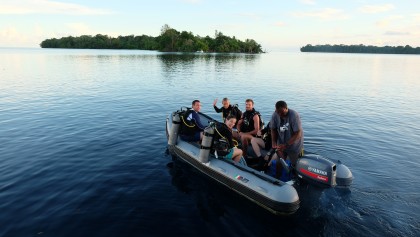 A group of tourists scuba diving in the Russell Islands

There is an urgent need to upgrade existing tourism facilities to international standards, the Solomon Islands Government believes.

Speaking on the National Tourism Development Strategy 2017 during SIBC’s Distaem Nao program this morning, Minister of Tourism and Culture Bartholomew Parapolo said there were multiple targets for tourism under the strategy.

Tourism in the Solomons has long been considering a sleeping giant, but according to most analysts a lack of infrastructure compared to other Pacific nations is holding it back.

“It (the strategy) will ensure tourism products and properties under development are completed are the right standard,” Mr Parapolo said.

“Implementation of the development will be in line with a need to upgrade existing facilities to international standards.

“Given there are other new areas for tourism development, my ministry is working on a new budget (for) public-private partnerships, marketing and promotion and the hosting of the Melanesian arts festival and the creation of the crafts centre.”

Mr Parapolo confirmed 19 cruise are set to visit the Solomons during 2017.

Nine are large vessells operated by companies such as P&O. Four are confirmed to visit Gizo, while six have already visited.