A total of 140 Solomon Islands Chinese that were affected by the November 2021 violent riots, looting and burning down of shops in Honiara have returned to settle back in China. 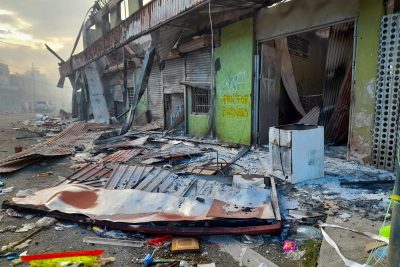 Some stores that were looted and set ablaze in Honiara. Photo Courtesy of Charley Piringi

The recent violent riot in Honiara was believed to have occurred because factions in the society still disagreed with the government’s switch to communist China. Solomon Islands foreign policy switch to Beijing with little public consultation was one of the mix of issues that led to the protest that turned violent in November 2021.

Responding to the above statement, H.E Fugui said, to say that disagreement with the switch is one of the reasons why people had voted with their feet, is much a propaganda than a product of deliberate democratic decision-making.

H.E Fugui added, “I say that because there is a huge gap between dissension or disagreement and the troubles.”

He said, in politics and democracies, there is what is generally called the art of Democratic Debate, a noble institution in which Parliament is the best example of this.

“It is a controlled debate. It is where opposition views are valued and prized. It does not have to incur destruction and public mayhem as we have seen in the recent troubles, back home,” Ambassador Fugui stated.

He said usually, when Cabinet makes decisions, it seldom reverts to consulting people.

“There are established practices and processes that the democratic system has put in place. People have to resort to this when they want to change important decisions, laws, and even policies. In all these, we need to follow due process and keep within the parameters of the Law of the land,” the country’s first Ambassador to PRC stated.

In brief, H.E Fugui said the government of the day makes decisions and people merely live with such decisions.

“Should we disagree, there are established channels to make changes. The last thing we would want is to cause destruction. We should not take the law in our hands.

“Finally, if we want healthy nation building, we should always strive to find solutions and resolutions instead of causing problems and ruining our nation,” he told SIBC News.