AUDIT MANAGERS GRADUATED OVER THE WEEKEND 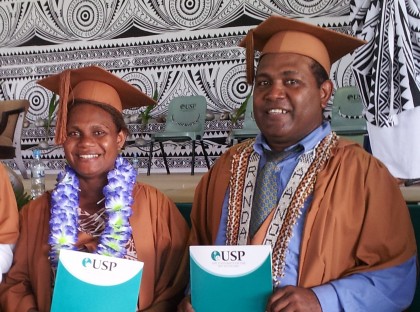 Two Managers at the Office of the Auditor General (OAG) have graduated over the weekend and they are Randall Noda and Jenny Tura.

The two were among other students who graduated from the University of the South Pacific, USP, hosted in Honiara over the weekend.

A media statement from the Office of the Auditor General said this is another milestone in the professionalisation of the office under an accelerated study assistance plan initiated by former Auditor General Mr Edward Ronia, who will be very proud of staff achievements to date.

It said this also marked another successful outcome of the Australian Government’s Last Semester Program, LSP, assistance to the office which saw both Mr Noda and Ms Tura attend a semester at the University of South Pacific campus in Fiji to help complete their degree studies.

Meanwhile, a senior representative at the office said they are already supporting some of its graduate staff in taking the next step of commencing their studies for professional accreditation as Certified Practicing Accountants, CPA, through the Institute of Solomon Islands Accountants, ISIA.

This has been made possible because ISIA has concluded negotiations with CPA Australia, which will see its members having access to the CPA Australia’s Certified Practicing Accountant Program at a fraction of the normal cost.

The OAG statement said ISIA will be putting the proposed two year licensing agreement with CPA Australia to its members for endorsement at the Annual General Meeting to be held later on this year.

It is planned that the new cost CPA arrangements will commence from Semester one next year.

The office also acknowledged the Australian High Commission and its staff for making the program possible.

The Homepage of the MEHRD website on display. Photo credit: GCU. The Ministry of Education and Human Resources Development has announced they will be looking ... Read More