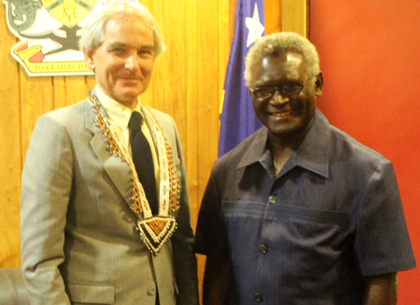 Deputy Secretary Wells is on a three-day visit to Solomon Islands.

A statement by the Prime Minister’s Office says as the Deputy Secretary with oversight for Pacific foreign trade and aid policy, Mr. Wells conveyed Australia’s strong commitment to security and stability in Solomon Islands.

This commitment extends beyond the winding up of RAMSI next year, and it is a bipartisan commitment supported by successive Australian governments of both the Coalition and the Australian Labor Party.

The statement says Prime Minister Sogavare was appreciative of the gesture shown by Australia on its commitment to maintain law and order in Solomon Islands post-RAMSI.

Meanwhile, detailed consultations on bilateral security and police cooperation after RAMSI will resume after the Australian Federal election on 2 July.

He was accompanied to the courtesy meeting by Australia’s High Commissioner to Solomon Islands, His Excellency Andrew Byrne.