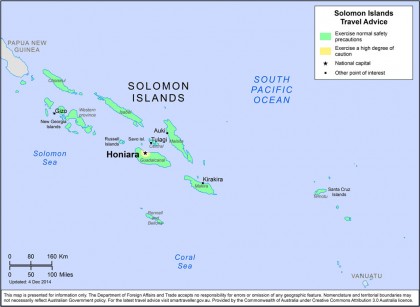 A bilateral security arrangement through which annual security discussions could be held is being proposed by Australia for Solomon Islands.

As part of its post-RAMSI bilateral arrangement, Australia is looking forward to having an annual security dialogue with Solomon Islands.

“Another proposal that we have for building our security cooperation is a security dialogue, some kind of annual meeting between senior officials of various agencies involved in security where we can provide a formal forum for us to talk about common security challenges, common problems both for us bilaterally but also for the region to share policy ideas and future proposals for security and stability cooperation. We’re hoping that we can have one of these security dialogues.”

With a similar arrangement in Vanuatu, Ms. Hoggart says Australia hopes to formulate one with Solomon Islands, prior to RAMSI’s departure next June.

“We have a bilateral security talks arrangement already with Vanuatu so we’d like to have one with the Solomon Islands hopefully before RAMSI’s scheduled departure and it would be something where we get officials together from agencies like Foreign Affairs, from law enforcement agencies, from the Australian Defense Force, from saying border protections and customs, Ministry of Fisheries, those kinds of things to talk about a range of issues.”

The Australian mining company, St Barbara, has shown no interest in returning to operate Gold ridge mine. The company pulled out after last year’s flash ... Read More