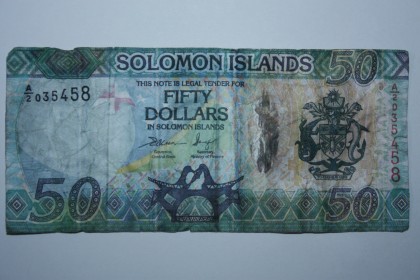 The Central Bank of Solomon Islands (CBSI) has confiscated the first ever counterfeit copy of the newly introduced 50 dollar banknote recently launched on September last year.

Reports received by the Bank’s Currency & Banking Operations Department stated that local vendors in Honiara found a counterfeit 50 dollar note (Serial Number: A 2035458) in their possession this week.

A Central Bank statement said it was noted that the intricate details of the counterfeit note found can only be produced from high-resolution printers and photocopier machines.

The Bank cautions the general public to be careful during this festive season when dealing with money, especially banknotes.

It adds it is during these times when fake banknotes can easily slip into our possession.

Meanwhile, the Bank encourages people to continue familiarizing themselves with the most visible security features embedded in genuine banknotes in order to help stop the illegal practice of producing counterfeits.

It advised people to always check, see and feel any banknotes and immediately report as well as identify those persons passing on the fake notes.

Counterfeiting is illegal under the CBSI Act 2012 and persons or groups guilty of committing this offence can be prosecuted.