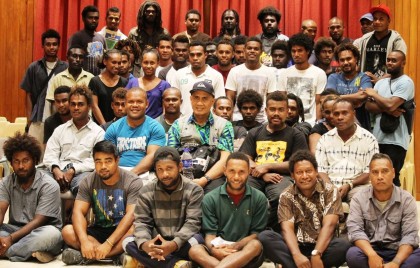 The Constitutional Reform Unit (CRU) has concluded a four-day awareness program on the second 2014 Draft Federal Constitution of Solomon Islands with our students studying at the Papua New Guinea University of Technology in Lae over the weekend.

Mr. Teutao says he was satisfied with the awareness program and thanked the students for their participation.

CRU Director, Philip Houlia says the team was grateful to the university’s administration for arranging the meeting venue on campus and Unitech’s S.I Students Association (SISA) for assisting in
logistics.

Some of the discussions were centred on the capital city, national symbols, national security, human rights, customary land ownership and naturalised citizenship.

About 50 students participated in the awareness.

A statement from CRU says this is the last of consultations with our students and academics studying abroad.

The team returns this week from Port Moresby and will continue the awareness programs in Honiara.