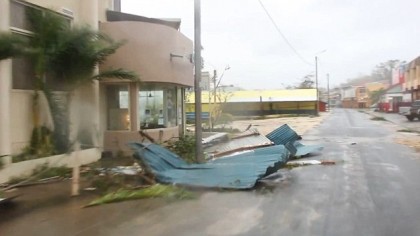 At least four people have died in Vanuatu’s capital of Port Vila, a witness says, in one of the strongest tropical cyclones to have hit the South Pacific.

Radio Australia reports this came amid unconfirmed reports that more than 40 people may have perished elsewhere in Vanuatu as a result of Cyclone Pam.

One person has also died in Papua New Guinea’s West New Britain province after a tree fell on a house during strong winds driven by the storm.

Vanuatu coordinator of climate change not-for-profit organisation 350, Isso Nihmei, said he and others tried to rescue three people in Port Vila who later died in hospital.

Nihmei said they heard some people nearby who shouting and calling to them but when they got there, they saw one man who was already dead.

He said there were other people that they rescued, but they were really weak.

He said they took the people to the hospital, but they died in half an hour.

Mr Nihmei said they had injuries to their faces and bodies and were living close to the sea. He said they had chosen to stay because of their boats.

SIBC News understands the death figures may have changed since this story was published online.