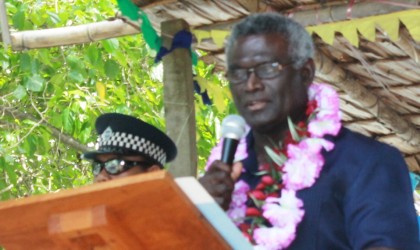 The Democratic Coalition for Change Government (DCCG) is proud that Solomon Islands now has a Police Force that is better disciplined, effective and competent to take care of any law and order situation in the country.

He said it is heartening to see the Royal Solomon Islands Police Force taking responsibility and acting independently from the Participating Police Force.

Mr Sogavare adds, in terms of gaining people’s confidence, nothing more will stand as a proof to that development than to see the RSIPF taking more responsibility with confidence and professionalism.

Meanwhile, Prime Minister Sogavare is confident about filling in the gap to be left vacant after RAMSI leaves in 2017.

Mr Sogavare says over the years, successive Governments have been calling for a seamless transition of RAMSI.

He says his Government is serious and is committed to ensuring that come 2017 when RAMSI leaves, it is not a time to panic but a time where Solomon Islands is ready to stand on our own.

Mr Sogavare says, the establishment of the Solomon Islands Government Working Group on RAMSI is a demonstration of the commitment that the Government has in the drawdown process.

PARLIAMENT ADJOURNED DUE TO LACK OF QUORUM