The Permanent Secretary (PS) of Ministry of Finance and Treasury (MOFT) Mckennie Dentana refutes claims by Alfred Sasako in the front page of Solomon Star article published on Tuesday 29th March that the Government is in Financial Distress and have hit rock bottom. 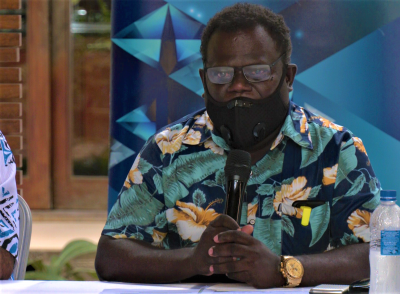 In a statement to media,  PS MOFT Mckennie Dentana reassures the public and all stakeholders, that although Solomon Islands is facing a challenging time, like all other countries throughout the region due to the current pandemic, the Ministry is managing government finances prudently and responsibly according to law, to ensure that resources are available to meet the financial obligations of the Government during this challenging times.

Dentana also confirm that Solomon Islands had faced a significant challenge since 2020, which was further exacerbated by the burning and looting of private and public infrastructures in Honiara in late 2021 and the covid-19 community transmission since Janaury this year.

“These unfortunate events had put a lot of pressures on government finances. However, despite the significant pressures, the government has taken control of the situation and put in place appropriate fiscal measures to manage and mitigate the financial situation pragmatically,” Dentana stated.

The Permanent Secretary (PS) of Ministry of Finance and Treasury (MOFT) further revealed that the Government’s current financial position is robust and well above the IMF Benchmark of 3 months of expenditure cover.

“This means that the Government can still meets its financial obligation for the next three months even though if limited or no domestic revenue is collected from the major Government’s revenue agencies,” Mckennie Dentana explained.

Mckinnie Dentana revealed as well that despite the pandemic since 2020 and its impact on Government finances, the Ministry always ensure that fiscal management is a number one priority and alway maintained under this benchamrk due to uncertainties of this pandemic and to ensure that Government have some resources to meet its obligation when domestic economic activity shuts down.  This is exactly what we experienced during recent lockdown.

“I am comfortable and not too worry because Government have somes resources to meets it obligation despite the recent lock down or ceased of economic activites especially here in Honiara early this year. Our cash position today is even 22 per cent stronger than on 31st Decemeber, 2021”, Dentana pointed out.

However, this year will be a challinging year given the forcasted negative growth of the local economy due to last years unrest, the COVID-19 community transmission and the potential fallout of Ukraine/Russia conflict  that will transmit into the commodity prices that reaches our shores, while at the same time delivers the Government’s commitments in the 2022 budget, according to the Permanent Secretary.

He said at the moment, the government is yet to pass the 2022 national budget, and thus, the government is operating under an interim budget. As a result, the expenditure are being prioritized to essential services, utilities, payroll, rental and arrears are being managed and slowly being settled.

Mckennie Dentana also confirmed that the other possible reason could relates to processing issues. This could involve compliance requirement that are not quickly addressed or payments are not quickly transmit to Treasury in time for payment.

Dentana assures the public that its officers will continue to reach out to all Government Ministries to identify options to manage their commitments, especially arrears and other commitment to ensure that payments are made on time during the current interim period.