Detke refutes PM as his savior, thanks Su’u and late Nori

Member of Parliament for Northwest Guadalcanal Bodo Detke has outrightly refuted claims by Prime Minister Manasseh Sogavare this week that he saved him and late John Garo from being killed in an alleged abduction dated back to 2000. 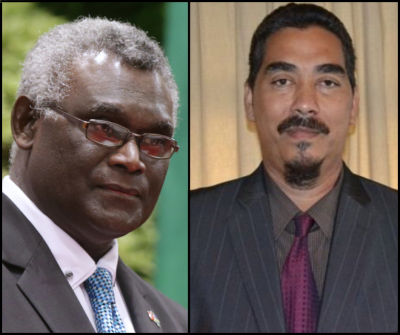 The Prime Minister during his debate on the Motion of No Confidence on Monday this week, strongly denied allegations of any involvement in the incident which was laid against him by Moses Su’u, a former Malaita Eagle Force (MEF) Commander in a video that went viral in social media last year.

The Prime minister insisted that it was him and the Member for South New Georgia, Rendova and Tetepare that saved their lives.

But northwest Guadalcanal MP denied this in a statement to the media yesterday. Below is a verbatim of the statement provided by Mr Detke.

“Following the responses made by the Hon Prime Minister during the Vote of No Confidence debate on 6th December 2021, there has been an increasing demand in the social media for me to thank the Prime Minister and the Hon. Member for South New Georgia, Rendova and Tetepare Hon. Danny Philip for saving my life when I was abducted and brought to his office at the Official Leader of Opposition at Vavaya Ridge in Honiara in year 2000.

The fact that late John Garo and I were abducted and brought to the office of the Official Leader of Opposition at Vavaya Ridge in Honiara in Year 2000 has now been admitted by the Prime Minister Sogavare.

What has not been uncovered or explained is the motive for the abduction and for taking us to the office of the Leader of Opposition. I reserve my right not to venture into this part of the plot until I am comfortable that the time is right for me to do so. There are many factors I must weigh before engaging into such venture, eg. the safety of my family and the businesses and the partiality of the police.

“However, in the meantime, I am obliged to make the following acknowledgements to the people whom I knew saved my life and that of late John Garo;

“(i) I would like to sincerely thank the late Andrew Nori, my former lawyer, who intercepted just at the right moment and ordered our immediate release from the hands of the abductors.

“I would also like to sincerely thanked Moses Su’u for not executing the next stage of the plot (i.e., to kill the late John Garo and myself), for his humility to come and make confessions to me personally about the plot and for apologizing to me personally,” the statement concludes.

Mr. Su’u, who is also the current president of Solomon Islands Post Conflict Rehabilitation Restoration Association (SIPCRRA),  in the video claimed that Prime Minister Sogavare who is the then Leader of Opposition directly involved and masterminded the incident.

During a tense debate on Monday, Prime Minister Sogavare has strongly denied being the mastermind of the alleged abduction on a floor of Parliament.

He said: “The two alleged victims of the incident have a lot to thank me and the Member for South New Georgia, Rendova and Tetepare.

“Without our direct and risky interventions they would have been killed on that day by men in military fatigue.

“But instead of thanking us, what we get is false allegations against us,” Prime Minister Manasseh Sogavare said.

An example of dried beche-de-mer. Photo credit: Solomon Times. The ban on the harvest and sale of beche-de-mer or sea cucumber has been lifted for ... Read More