The Royal Solomon Islands Police Force (RSIPF) Explosive Ordnance Disposal (EOD) team have conducted an unexploded ordnance (UXO) operation in the Western Province from 17 May and will end on 4 June 2022. 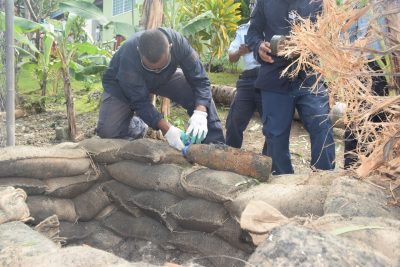 A EOD officer displays the shell after safely rendered during a similar operation conducted years back. RSIPF file photo

Officer In-charge (OIC) of the RSIPF EOD team, Inspector Clifford Tunuki says the tasks will be carried out in Seghe area and surrounding communities.

“Essentially, this operation is in support to the initial sub surface UXO clearance of the Seghe Airport,” Inspector Tunuki says.

He adds, currently they have a team on the ground to respond to any UXO findings at the Seghe airport.

Whilst a team is there, Inspector Tunuki calls on the communities of Seghe and other surrounding communities and Islands to report any sightings of UXOs or bombs to Police EOD team on mobile 7495215 or to Seghe Police Station.

“We will have a team deployed to your community or Island and that the UXO or bomb will be dealt with immediately once reported to our EOD team,” OIC Tunuki says.

He further, explosive remnants from WWII have impacted our livelihood, environment and developments, and communities ,must work together to prevent this threat by reporting any sightings of any unexploded bombs through Police free toll line 999 or the RSIPF EOD mobile 7495215 or report it to any nearest Police Stations.

SIVB CEO Josefa Tuamoto. Photo credit: OPMC. International visitation to Solomon Islands in May 2015 has exceeded all expectations with numbers for the month increasing ... Read More