The government has clarified that it only funded 97 out of the 123 athletes that went to Saipan, Northern Marianas for the Pacific Mini Games recently.

Secretary to Prime Minister Dr Jimmy Rodgers said the athletes from sports that had no ongoing activities in the country were funded by the National Olympic Committee of Solomon Islands (NOCSI). 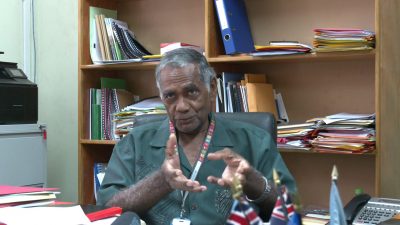 “The 97 are the representatives of the six sports that were approved by the Minister of Home Affairs. The other three sports have no ongoing activities in the country, so the Minister responsible and Cabinet decided for them not to go.

“However, NOCSI is an independent entity which can send others apart from those that were supported by the government, so the government cannot stop them,” he said.

Dr. Rodgers made the clarification at a recent government media conference.

He adds, the government met the cost for the chartered flights for all the athletes, but other expenses were funded by NOCSI.

“The government provides for the chartered flights to leave and return, however, their allowances and food while they were in Saipan is provided by NOCSI.

“By the same token when they return, the government should only be responsible to feed only 97 and not all 123. However, we picked up all 123 upon their arrival that will be looked after until the first of July,” he said.

With that, the Secretary to Prime Minister also clarified concerns that were raised regarding the food distribution for the athletes while in quarantine.

Rodgers said nationals returning from overseas are to pay for their own food while in quarantine as per a new policy.

“Two months ago, the oversight committee through the recommendation of the camp management made a decision that all nationals returning from overseas are to provide for their own food and the government will only pay for rent.

“It did not start with these athletes returning from Saipan. Those returning from Labor Mobility and all those that came before, they met their own food expenses and made arrangements with their families to bring food while they are in quarantine.”

Dr Rodgers said the reason for this is the government has faced many challenges for funds to continue the feeding.

“Just to put it straight that the government did not abandon anybody, it’s more a question of perhaps NOCSI was not communicating enough with the families of the delegates that went.

Despite this, SINIS and NHA have supported the delegates upon their arrival according to Dr Rodgers.

The returning delegates left quarantine on the 1st of July last week with the removal of institutional quarantine.