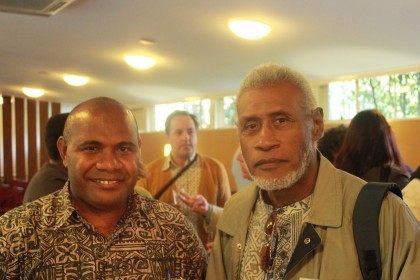 The former Chair of the first Solomon Islands Truth and Reconciliation Commission, Reverend Sam Ata has passed away.

Reverend Ata passed away at around 10pm last night.

Under his leadership, the Truth and Reconciliation Commission documented testimonies of victims and perpetrators of the ethnic tension through numerous public and closed hearings in Honiara and in the provinces.

A relative, Henry Ata Daukalia told SIBC News today, the late Reverend passed away at around 10 past 10 last night after a long illness.

“He served the church until his appointment to head the Truth and Reconciliation Commission (TRC), after which he had a job with the Solomon Islands Council of Churches Association (SICCA). From there he went on to have a job at the Pacific Theological College in Suva, Fiji. By then he was so sick, and so for the last six months or so he was waiting to recover but was unable to so he returned. His condition has deteriorated upon his arrival until he finally passed on last night.”

Reverend Sam Ata is survived by his wife, three daughters, and a new born son.

SIBC News understands funeral arrangements for the late Reverend are still being finalised.