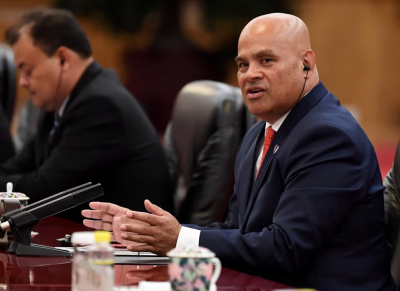 In a letter dated March 30, 2022, H.E. Panuelo appealed to Prime Minister Sogavare to respectfully reject and give deepest consideration to longer-range consequences from Solomon Islands’ Proposed Security Agreement with the PRC.

“It is the view of the FSM National Government that such a novel and unprecedented security agreement between China and Solomon Islands poses a risk of increasing geopolitical tensions across the Blue Pacific Continent.

“My fear is that we—the Pacific Islands—would be at the epicenter of a future confrontation between these major powers. It’s not an impossible fear; it has happened before. Both the Federated States of Micronesia and Solomon Islands were the battlegrounds during World War II.

“I am confident that neither of us wishes to see a conflict of that scope or scale ever again, and most particularly in our own backyards, and most especially as we can see—from Russia’s invasion of Ukraine—that the bigger countries will choose violence if they think it serves their interests, and without regard necessarily to our interests, such as our interest to not become collateral damage,” the FSM President wrote.

He said despite FSM’s long friendship with China (since September 11th, 1989),  and even longer enduring partnership with the United States, he is appealing to Prime Minister Manasseh Sogavare to give deepest consideration to this agreement that could well flow from a decision to host the establishment of a military presence by China in Solomon Islands.

“As much as your bilateral security arrangement may be strictly a matter between your country and the People’s Republic of China, its existence would absolutely affect all countries who call the Blue Pacific their home.

“The Federated States of Micronesia cannot endorse or agree if your decision is to proceed with a security relationship with the People’s Republic of China, because of its far-reaching and grave security implications for our harmonious and peaceful Blue Pacific Continent,” H.E. Panuelo stated in his three-paged letter .

However, Prime Minister Sogavare has dismissed critics of the deal in a fiery speech Tuesday, saying it was “very insulting … to be branded as unfit to manage our sovereign affairs” by other nations.

“We find that very difficult to swallow, because it strikes at the underlying principles of our Foreign Policy of; Friends to All, and Enemies to None. We find it very insulting to be branded as unfit to manage our sovereign affairs while having other motives of pursuing our national interests.

“We need to have some liberal thinking to understand the complexity of the issues we are talking about. We are aware that critical security areas interests have been highlighted, but our government is focused on  our national interest and will always ensure our sovereignty is intact,” Sogavare said.

Meanwhile, in a statement issued by the Government today, the PRC have initialed elements of a bilateral Security Cooperation Framework between the two countries today.

The draft Framework Agreement will be cleaned up and await signatures of the two countries Foreign Ministers.

“Solomon Islands continue to roll out the implementation of its National Security Strategy and uphold its Foreign Policy of “Friends to all and enemies to none.”

“The country will work with all partners in providing a safe and secure nation where all people are able to co-exist peacefully,” it says

It adds, Solomon Islands seeks greater security partnership with other partners and neighbours and once again expresses its deep gratitude and sincere appreciation to Australia, Papua New Guinea, New Zealand and Fiji for the presence of their Security Personnel in Solomon Islands.

“We thank their respective governments and peoples for the service of their professionals whom we welcome and acknowledge with a thankful heart,” the statement concludes. COVID-19 Results of the third suspected Coronavirus case of Solomon Islands underwent testing in Australia this week has tested negative. The Ministry of Health and ... Read More

The Guadalcanal Province Executive (GPE) have responded to a media statement by the Ministry of Provincial Government and Institutional Strengthening (MPGIS) concerning the GPEs’ resolution ... Read More

A foreign national who arrived from a foreign vessel was tested positive for COVID-19 in the Western Province today. The person is serving the mandated ... Read More