Government confirms, it is working to resolve outstanding LSL issues

The Office of the Prime Minister and Cabinet (OPMC) confirms that it is working to resolve long outstanding issues between Levers Solomon Ltd (LSL) and the Solomon Islands Government as one of the key policy objectives of the DCGA Government.

In a statement today, the Government says it is working to acquiring LSL and its assets through Court appointed Administrators under a Deed of Company Arrangement for a fraction of the cost to what the value of land owned by LSL is worth. 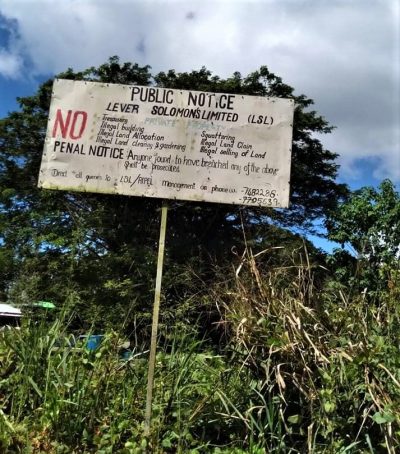 The OPMC statement states, ongoing negotiations are between the Solomon Islands Government and the Administrators appointed under the Corporations Act of the Commonwealth of Australia.

Under the Deed of Company Agreement, if executed, will see the Government of Solomon Islands gaining full control of the Companies who control LSL and the assets.

Contrary to what Island Sun Newspaper is erroneously reporting, the negotiations to acquire LSL has been sanctioned by the Prime Minister.

The statement emphasised, resolving the outstanding issue is a major policy objective of the DCGA.

The RIPEL Cabinet sub-committee consists of officers from the Office of the Prime Minister, Ministry of Finance and Treasury, Ministry of Lands, Housing and Survey and the Attorney-General’s Chambers.

There is no one person directing the show. It is Government policy to ensure that the issue of LSL/RIPEL is resolved conclusively in our national best interests, it stated.

Further, both the Guadalcanal and Central Islands Provincial governments have also indicated their resolve to ensure that land issues relating to LSL be resolved once and for all.

The OPMC statement further explains, negotiations to acquire LSL commenced in July 2021 and continues until today.

It further said, the Government is yet to make a decision on whether to proceed with the deal. Cabinet will be briefed on the options before a decision is made on which option to pursue.

It highlighted, there is nothing “dubious” or unbecoming of the current negotiations and the Government again reiterates call to media for responsible and balanced reporting.

Comments should be sought from the Attorney-General and Chief of Staff by Island Sun prior to the publication of the article.

The Government calls on the President of MASI to ensure that media outlets in Solomon Islands adhere to professional and ethical standards. Pacific Casino Hotel The COVID-19 Oversight Committee has assured the public that allegations of breach of quarantine protocols on 3rd September at the Pacific Casino ... Read More