The Government has defended its plan to extend the life of this Parliament from four to five years.

In a Government press conference today, Special Secretary to Prime Minister Albert Kabui says this is constitutional as provided for in the Constitution. 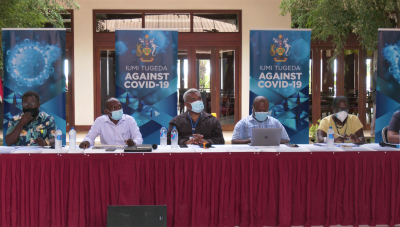 He says, the plan was made as manpower, resources and logistics would be stretched if two major events, the National General Election and the Pacific Games 2023 are to be held in the same year, 2023.

“The government feels that in order for us to accommodate the Pacific Games, we have to move the election. The election itself does not start when nominations are open, it starts with the registration of voters, and the current voter registration list needs to be updated by the Electoral Commission,” Kabui says.

He says voter registration of voters itself is a big exercise that needs time.

“The thinking here is for the Parliament to extend the life of Parliament by one year – that can be either by a Sunset Clause in the Constitution or permanent,” the Prime Minister’s Special Secretary says.

“This means whenever the cabinet wants to come up with a policy it thinks fit, it has the mandate of the people – by way of being elected. As such, the cabinet does not need to consult the people when it wants to change policies,” he explains.

He says this will be taken to the floor of Parliament, and since it’s a constitutional amendment, they need two-third majority to pass it.

Attorney General John Muria Jnr says there is no constitutional provision stating that the government must carry out a [nation-wide] consultation.

“We do that because it is a good practice but in terms of legal requirements that there must be consultation before passing any law, there is none. This is the Westminster System that we adopt,” he explains.

The Opposition Group in Parliament last week strongly objected the government’s plan to extend the life of Parliament from four to five years.

Opposition leader Matthew Wale said extending the life of parliament is unconstitutional and self-serving because there is no consultation with people – the electorate.

“So, we view this as a serious breach of trust with people, but it does not surprise us because this is the government that loses the trust of people in this country,” Wale said.

He said sentiments always expressed by the government in Parliament and media that ‘the government does not want to consult with tom dick and harry’s, labelling them as wrong thinking Solomon Islanders’ are very insensitive.

He said these are dangerous implications to our people.

“As leader’s we should not see our people as tom, dick or harry. They are our people, our voters and they are Solomon Islanders. These people also have rights and they are the ones that gave us the mandate in Parliament,” he said.

Kenilorea said when it comes to election cycles all Solomon Islanders have equal views.

“Some of our people might not have fancy titles or a colourful educational background but when it comes to election cycles, their views matter,” he said.

Kenilorea also questioned the consultation report on the extension of parliament promised by the Prime Minister in Parliament.

Boat with 14 people missing at sea, children among those missing

Fourteen people are missing at sea after a boat they were travelling in failed to reach its final destination. Boats travelling in unfavourable weather. Photo: ... Read More

The Solomon Islands Government through the Cabinet has approved a mandatory vaccination to all Public servants, State-Owned Enterprises, and the Private employees undertaking frontline work.   ... Read More