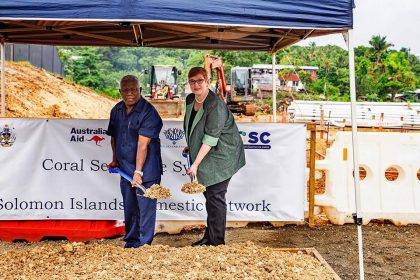 Ms Payne made the statement yesterday during the ground-breaking ceremony of the Coral Sea Cable System at the cable’s landing station at Lengakiki in Honiara.

Ms Payne described the submarine cable as a game changing cable to the Solomon Islands.

“The cable station landing site where we are now, which soon will house one end of a four thousand seven hundred kilometer long fibre optic submarine cable,” she said.

“What that game changing cable will deliver here is faster, cheaper , and more reliable communication infrastructure here in the country.”

“Project such as this one comes at a huge financial cost, in this regard I thank the governemnt of Australia for meeting two thirds of the local cost of the total cost of the project,” he said.

The Project costs 137-million Australian dollars – one third of which was borne by the Solomon Islands Government.

The Fibre Optic Submarine Cable will cover a distance of 4,700 kilometres, linking up Sydney, Port Moresby and Honiara.