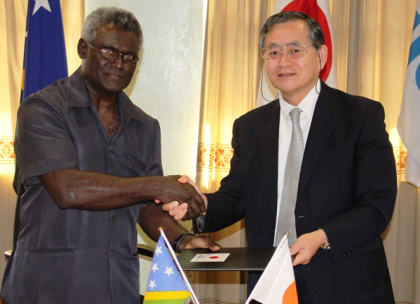 A handshake of friendship between Solomon Islands and Japan by PM Sogavare and Ambassador Kimiya after sealing the agreement for the Kukum Highway Project. Photo credit: OPMC.

The Japanese Government has signed over $213 million for the project to upgrade the Kukum Highway in Honiara.

Components of the project include reducing traffic congestion at the Central Market and improve pedestrian access in the area.

The Project will also redesign the Honiara City Council roundabout to improve the efficiency of the junction and traffic flow around it.

The project will also reconstruct the Kukum Highway over a three-kilometer length between the Honiara City Council and the Ministry of Fisheries, and  redesign the Vura junction to improve its safety and capacity.

Documents for the project was officially signed yesterday by Japan’s Charge de Affairs in Solomon Islands Kenichi Kimiya and Prime Minister Manasseh Sogavare at the Office of the Prime Minister and Cabinet.

Speaking at the signing, Prime Minister Sogavare described the project as a ‘very generous’ assistance from the Japanese Government to improve the road infrastructure system in Honiara which is important to the economy and road travelling public of Honiara.

Construction on the Kukum Highway upgrade is expected to begin in August.

The Leader of Opposition Jeremiah Manele. Photo credit: SIBC. The Parliamentary Opposition has called upon the Democratic Coalition for Change Government to correct the current ... Read More