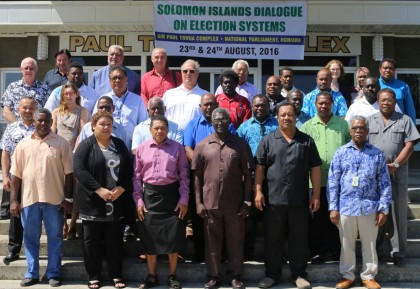 All the leaders in a group photo. Photo credit: SIEC.

Members of Parliament have completed a two-day dialogue on electoral systems that could be adopted in Solomon Islands.

He said Parliament is a very formal setting and having an informal meeting as such will allow MPs to find out more about the different election systems used around the world.

Prime Minister Sogavare said an expected outcome of the meeting is some advice as to the election systems that best suit our context, so as to have something to share with the people.

On day two of the dialogue, MPs were asked to rank the criteria for determining a system of election in order of priorities from 10 (highest) to 1 (lowest priority).

On this, the Prime Minister said having assessed our priorities, we need to find what election system will fit these priorities.

He said it is important that we find what is good for us and carefully consider which system fits the country’s context and clearly explain why they are recommended.

MPs have also discussed anti-defection measures and women’s political participation, looking at examples of how various electoral systems can influence the number of women that are elected.