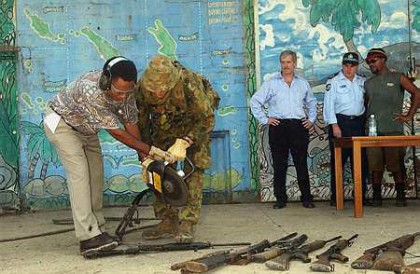 Licensed Riffle owners from North Malaita have expressed gratitude to the National Government and the Participating Police Force PPF for their commitment to compensate citizens whose legal rifles were seized by RAMSI.

Permanent Secretary of the Ministry of Police, National Security and Correctional Service Mr. Edmond Sikua has mentioned during the Bills and Legislations Committee hearing last week that they are in the process to compensate those license rifle owners.

“As announced by the Permanent Secretary, licensed rifle owners here were so relieved after hearing that the Ministry of Police, National Security, and Correctional Services is in the process of compensating licensed firearm owners in the country.”

Kiri said few license rifle owners in their areas have passed on and the right to claim the compensation will be transferred to their children and close relatives.

WE WILL SETTLE THE DEBT INCURRED: PREMIER RAMOHIA