The Democratic Coalition for Change (DCC) Government has indefinitely deferred the Anti-Corruption Bill 2016 and Whistleblowers Protection Bill 2016 to allow for additional consultation and awareness so the bills are generally understood.

Announcing the bills deferment at the parliament this afternoon, Prime Minister Manasseh Sogavare says more work needs to be done on what the bills are and what they are not.

Prime Minister Sogavare explains in the meantime, both bills will remain in parliament until issues people are uncomfortable with are properly looked into.

He appeals to the population not to unnecessarily scare MPs with regards to the bills.

Meanwhile, Opposition Leader and MP for Hograno/Kia/Havulei Hon. Jeremy Manele describes a media statement from the Prime Minister’s Office last night claiming the opposition and Independent Group in Parliament will not support the bill as ‘misleading’.

Mr. Manele says, on the contrary, the opposition is ready to deliberate on the bill whenever it is taken to Parliament.

The Leader of the Independent Group and North East Guadalcanal MP, Dr. Derrek Sikua says his group supports the bill and wish it be
brought to parliament this week.

Mr. Sikua questions when the Government plans to reintroduce the Anti-Corruption Bill 2016 and Whistleblowers Protection Bill 2016 to parliament.

Meanwhile, Executive Officer of the Transparency Solomon Islands (TSI) Ruth Liloqula has pressured the Prime Minister to table the Anti-Corruption Bill 2016 in Parliament this week as promised.

Ms. Liloqula made the call following the Government’s announcement that the Bill will not be deliberated on this week.

Ms. Liloqula calls on the Members of Parliament to support the Bill.

“I call on the public to support the DCC Government which is taking the courageous stand to pass this bill in Parliament and I also call on members of parliament to support the bill and lastly, I call on the Prime Minister to table the bill. If it didn’t pass then we ourselves will know which leaders are really concerned for the country and which ones don’t.” 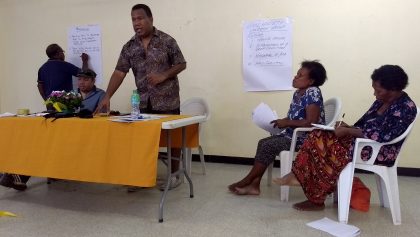 The civil society committee leads discussions on the Anti-Corruption Bill withdrawal As questions circulate about the likelihood that the Democratic Coalition for Change Government will ... Read More