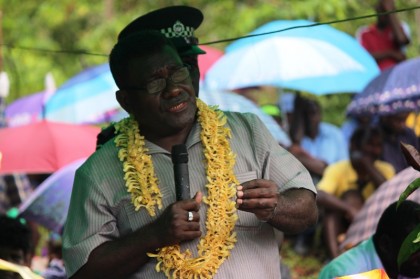 Caretaker Prime Minister Gordon Darcy Lilo has urged Churches to take the lead in addressing domestic violence in the country.

Mr Lilo highlighted this when he officially opened the Adventist Women Congress in Munda, Western province, Monday this week.

The caretaker Prime Minister said it was a duty of the church to address domestic violence based on principles and values imparted through the word of God.

Prime Minister Lilo told the 2,000 plus women delegates domestic violence is a concern for the church because it threatens life which is a gift to us by God.

He said the Church must play an active part in recognising those who suffer domestic violence and to make sure they must be protected and helped to continue to live better lives.

Prime Minister Lilo also encouraged the Church, as a key institution in the country, to consider developing messages and programs for domestic violence prevention and awareness programs.

He also told the Adventist Women Congress to ensure that church congregations are not creating or tolerating home environments that are unsafe for those who are already vulnerable, including children, women and persons with disabilities.

Graduation Hat. Photo credit: www.taghats.com The Mary Mazzarello Development Centre has graduated more than 20 women over the weekend. This is the fifth group of ... Read More