Man dies, another in critical condition after tampering with UXO

A man has died and another person is currently fighting for his life at the National Referral Hospital after they tampered with a World War II unexploded ordnance (UXO). 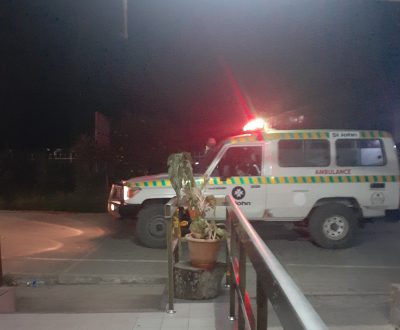 The tragic incident occured the eastern side of Hells Point, close to Tenaru area on Christmas Eve,  24 December 2021, a Police statement confirms today.

The Police Explosive Ordnance Disposal (EOD) Team confirmed that items such as hammer, screw drivers, hacksaw blades, spade and bush knives were located and gathered at the scene.

“From the evidence located and gathered at the scene, it indicated that the victims were tampering with the UXO which caused it to explode,” says the EOD Officer In-charge Inspector Clifford Tunuki.

OIC Tunuki adds: “Fresh ground excavations using spades were also seen at the site. Multiple UXOs items were lying around the incident site and others on top of the excavated soil.”

He said upon arrival of the EOD team, the victims of the bomb blast still at the site of the incident.

Inspector Tunuki said the condition of the other casualty is a matter for the health authorities to inform the public.

“Our condolences to the family and relatives of the deceased for the loss of their loved one.”

Tunuki remind the public that bomb were designed for two purposes which is to kill and destroy.

“Therefore, please if you know any unexploded bomb around your area do call EOD Team or report it to any nearest police station.

“Always remember that if you suspect an item that may contain something dangerous or you do not know what it is, then call the Police free toll line on phone 999 or call EOD on phone 7495215,” says Inspector “Tunuki.

SIBC Team visited the NRH Accidents and Emergency (A&E) Department last night and could vividly hear the other bomb casualty cried in agony in the (A&E) Mini Theatre.

Information our team gathered from the NRH last night said the two intend to cut open the UXO to collect gunpowder – a propellant in the UXO.

It said the deceased is from North Malaita and the casualty is from Kwaio in Malaita Province.

Yesterday’s bomb tragedy is the third fatal UXO explosion that occured this year alone, within and close to the capital Honiara.

In early October 2021, suspected bomb blast at LDA area, Upper Betikama in east Honiara has also killed two people, a father and his son who was a grade five student.

Two locals were also killed in May this year. The two all succumbed to a WW2 US 105mm high explosive projectile that detonated and also injured two others in Lengakiki, Honiara.

In September last year, an Australian and a British bomb disposal workers were also killed in an explosion at their home at Tasahe in west Honiara.