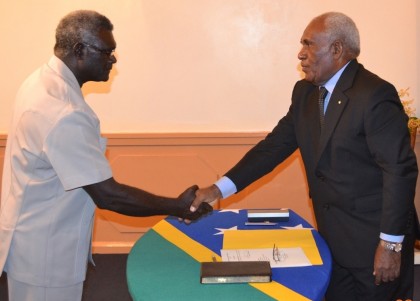 Prime Minister Manasseh Sogavare was sworn-in before the Governor General Sir Frank Kabui at Government House this afternoon after his election victory.

A government statement says Prime Minister Sogavare took his Oath to head the Prime Minister’s Office and the Oath of Allegiance before members of the Democratic Coalition for Change (DCC) and members of various diplomatic missions.

Meanwhile, prior to the sworn-in ceremony Mr Sogavare said he would work hard to rebuild the nation’s dire economy.

SIBC News understands members of Parliament today have elected Mr Sogavare as the country’s new Prime Minister in a secret ballot which he won by 31 votes to 19 against his only rival, Jeremy Manele.

Court. Photo credit: SIBC. A man from East Makira constituency has questioned the progress of the East Makira election petition in the High Court. The ... Read More