SLOW AND LOW REGISTRATION TURN OUT IN NORTH MALAITA 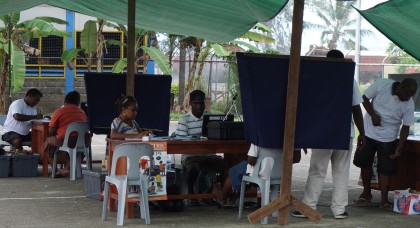 Registrations has been slow and low for North Malaita. Photo: SIBC.

Voter registration turn out at two Registration Centers in the North Malaita Constituency started low and slow on Monday, as discovered by registration officers at the sites.

“When I asked the two officers, Mr Willie Ausuta for Sidu VRC and Mr Jothan Basui for Fo’ondo VRC, they told me that the turn out is still low and slow at the moment, but hopefully this will improve towards the end of the week.”

“But despite that people’s turn out on both the first and second day of registrations, as I’ve witnessed and have gathered from both registration centres, Sidu has registered thirty on both days while Fo’ondo a hundred and 67 people,” reported Mr Kiri.

The Western Provincial flag. Photo: SIBC. The Premier of Western Province urges all eligible voters in the province to make the 2014 elections a peaceful one. ... Read More