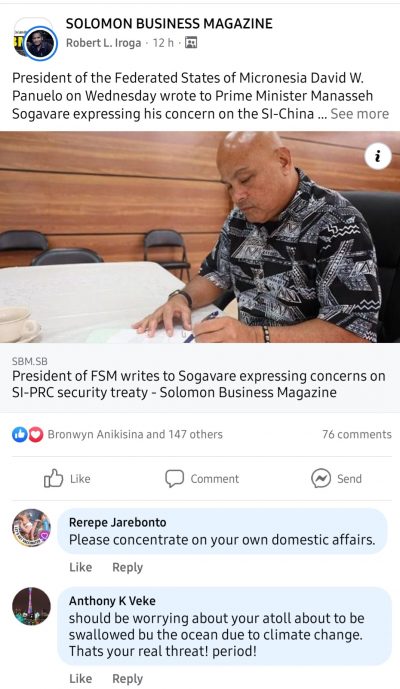 This followed a news article published on social media recently, which carried the President of the Federated Stated of Micronesia David W Panuelo’s letter to Prime Minister Manasseh Sogavare raising concerns on the proposed security treaty with China.

The Police Minster Hon Anthony Veke made sarcastic comments on social media that the president of FSM ‘should be worrying about your atoll about to be swallowed by the ocean due to climate change. That’s your real threat! Period!’

The Opposition Leader said it is sad to see such comment from a Solomon Islands Cabinet Minister to the FSM president especially on climate change.

“I hope this is not the DCGA’s policy stand on climate change. Maybe the minister failed to see what climate change has done to our own backyard,” Hon Wale said.

Hon Wale said Minister Veke’s statement is insensitive of the fact that Solomon Islands and our own people are struggling with the impacts of climate change everyday.

“Such comments are disrespectful not only to a regional friend but also to our own people on atolls and islands that are faced with sea level rise and impacts of climate change every day of their lives. Such statement should not even come from any ordinary Solomon Islander,” he said.

The Opposition Leader said Minister Veke should apologise for making such inconsiderate comments on social media because it does not reflect well of himself as a Cabinet Minister of the Solomon Islands Government. A copy of The Nation. Photo credit: SIBC. A lack of analysis and reportage of development in the mainstream media will now be covered by ... Read More