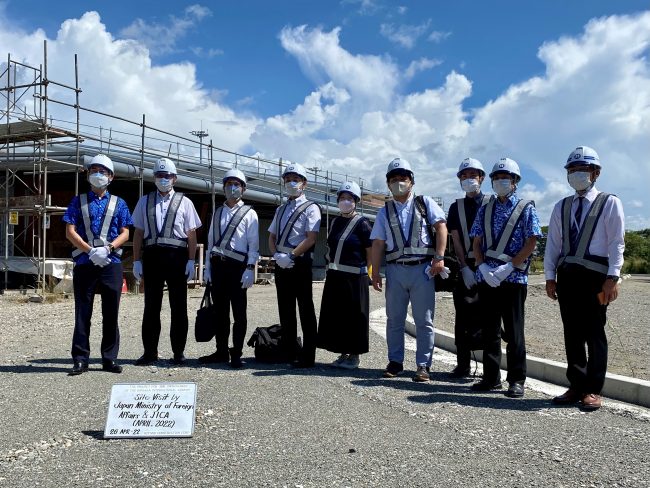 The project, which had been suspended for two months since the lockdown due to the COVID-19 community-transmission in January, has re-started since March 21st, but only with workers who have been vaccinated at least twice.

Strictly complying with the SIG’s Covid-19 protocol, the project has conducted an occupational vaccination rollout to provide vaccination opportunities to every local worker.

In addition to daily temperature monitoring of every worker and a strict policy on facemask wearing during work, the project reviewed the construction work process to avoid crowded work, installed ventilation fans at the site, and set up partition panels in the office space to improve the work environment.

After a series of discussions between the consultant and the contractor with MCA and MHMS, the project finally resumed on March 21st.

As of the end of March, this project has progressed 62.2% of the total and is currently steadily progressing toward completion in April 2023.

The construction work of the new international departure terminal is proceeding smoothly, and the installation of the aviation floodlights has been completed. Now the project is shifting its focus now to the construction of the civil engineering work of the surrounding exterior, the interior works of the new international terminal, the installation of necessary equipment, and the renovation work of the existing terminal building.

The apron expansion and new taxiway construction also have already been completed, and the existing apron and taxiway pavement repair and navigation lighting installation work are currently underway.

Foreign Vice-Minister Uesugi and other delegations inspected the construction progress of the new international terminal building from the entrance area to the check-in counter, through the immigration gate and departure waiting room, VIP room, and business lounge, and finally observed the newly constructed apron and taxiway from the observation deck.

The inspection team actively exchanged opinions on the spot, including questions regarding the procurement of construction materials in relation to the current situation in Ukraine and the recent depreciation of the yen. At present, the price of fuel, in particular, has increased by 40% since the beginning of the project, which is one of the major issues with this project.