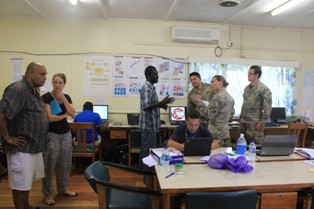 The National Emergency Operation Centre, NEOC, at the National Disaster Office is on full activation mode.

A statement from the office today updates its tally saying a total of 23 deaths and 9-thousand homeless people have been confirmed.

It says NDMO has been fully operational to monitor the situation and provide the best support to the affected areas.

National Operation Manager George Baragamu says currently displaced people are still occupying all 25 designated evacuation centres, and registration of all evacuation centres has been completed while validation is still ongoing.

He adds, the distribution of food rations and other important survival kits to Honiara and other affected parts of Guadalcanal are currently ongoing.

Mr Baragamu stressed, Honiara City and the whole of Guadalcanal is still declared as

Meanwhile, Mr Baragamu says NEOC is yet to receive updates from Malaita Province.

He adds, Isabel province has recorded two deaths and is currently awaiting assessment teams from Honiara.

Mr Baragamu explains, no reports of damages from Tropical Cyclone Ita was received for Rennell and Bellona province.

The Operations Manager adds, an aircraft with relief supplies from Australian arrives 8:30pm tonight, while another from New Zealand should have landed at 5:30pm this afternoon, with medical supplies and personnel.

The Solomon Islands Red Cross, UN Agencies and Non Government Organizations are currently working together with the Government to provide support in the current disaster.

He adds, both the Governments of Australia, New Zealand and the Republic of China Taiwan have pledged their support through cash donations and humanitarian support for Solomon Islands.