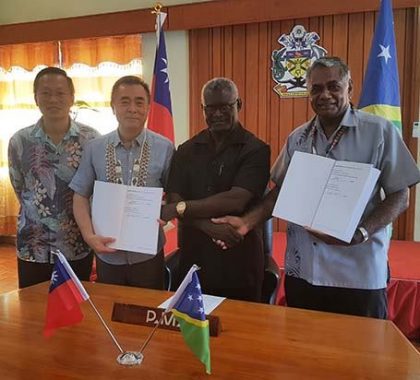 A Memorandum of Understanding for the construction of the National Stadium for the 2023 Pacific Games was signed yesterday.

The MOU represents the first step in implementing the Agreement signed between the Government of Solomon Islands and Government of Taiwan on 15 March 2019 on the funding of the National Stadium.

The signing took place only a few days after the Official Launch of the 2023 Pacific Games Theme, Logo and Theme Song on 4th July 2019.

The MOU sets out the parameters and the timeline for detailed consultations and negotiations between the NHA and Fu Tsu Construction Company Ltd on the design and construction of the Stadium.

The outcome of this consultation will be incorporated into a ‘Definitive Agreement’ to be signed between the NHA and Fu Tsu Construction Company Ltd no later than 1st November 2019.

He assured Chairman Lin, NHA looks forward to working with his team to ensure the definitive agreement for the design and construction of the 2023 Pacific Games Stadium is signed by or before 1st November 2019.

He adds, the stadium is another example of the cordial relations between Solomon Islands and Taiwan.