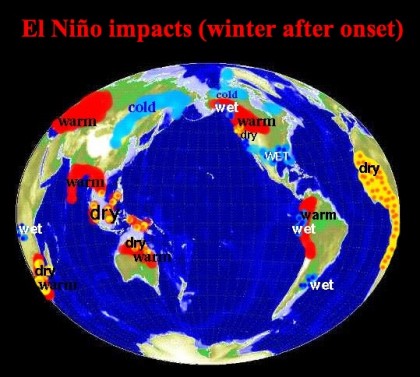 An example of an El Nino. Photo credit: waves.blogs.agu.org

People who depend on rainwater in the country are urged to start rationing their water due to the low rainfall currently experienced as the El Nino season continues.

Director of Meteorology, David Hiriasia told SIBC News it is likely there will be low rainfall, impacting parts of the country.

“We are now in an El Nino event and there is very high chance for a lot of places especially smaller islands which depend very much on rainwater to feel the impacts of the event as a result of very low rainfall.”

He says only systems like tropical cyclones would increase rainfall across the country, but with the current climate conditions a low rainfall is expected.

“We will need systems like tropical cyclones or such to increase rainfall across the country, but with the current climate conditions rainfall is very likely to drop, so it is very important for those who depend very much on rainwater to start consider how to use water, and even those who are using wells as they would not be suitable for drinking or bathing if the dry season continues.”

“At this moment we are facing difficulties in getting water as what we can do. Our water sources here are also drying out and you know, the Gizo population itself is quite large, so you’ll have to join queues of people waiting to collect water and this can go until midnight and that’s what the Gizo residents will continue to experience for the next few days.”

But Mr Sina said they are hopeful the situation will be addressed by the responsible authorities.

SIBC News is aware, a meeting was held today by the Western provincial government and provincial disaster stakeholders to address the situation.

A CSW 59 banner. Photo credit: www.goiam.org A Climate Change youth advocator has recently returned to the country after attending the 59th Commission on the ... Read More