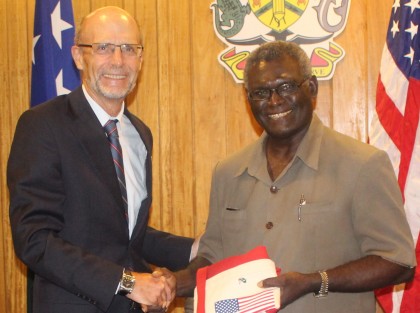 Prime Minister Manasseh Sogavare has acknowledged the increased engagement of the United States in the Pacific region.

Mr Sogavare made the statement during his meeting with Papua New Guinea based US Ambassador to Solomon Islands His Excellency Walter North yesterday.

A government statement said the two leaders discussed issues of common interest including US aid assistance to pacific island countries including Solomon Islands.

Speaking during the meeting Ambassador North said they have really stepped up the engagement in the Pacific region adding President Obama has committed his government and administration to a re-balance of the Pacific.

He said President Obama wanted to deepen the relationship with the Pacific which resulted in the visit of his Secretary of State John Kerry last year.

Meanwhile, in response Prime Minister Sogavare expressed his profound appreciation for the US government’s increased engagement in the Pacific region.

Prime Minister Sogavare said the active engagement in maintaining peace, stability and environmental safety is very important for Solomon Islands and like to see this kind gesture maintained.

He said Solomon Islands had its taste of domestic issues that drove down the path of ethnic uprising and resulted in the intervention by Australia and other Pacific neighbours adding the regional cooperation in time of need was highly appreciated.