The Royal Solomon Island Police Force has launched an investigation into an incident, which occurred at the commemoration ceremony of the 80th Anniversary of the battle on Guadalcanal at Bloody ridge today (Monday 8 August 2022).

The incident involved a local attacking a Japanese military man with a pair of scissors.

The Japanese, who is the media person for the Japanese delegation to the commemoration, sustained injury as a result.

The attacker was arrested on the spot and is now in police custody. 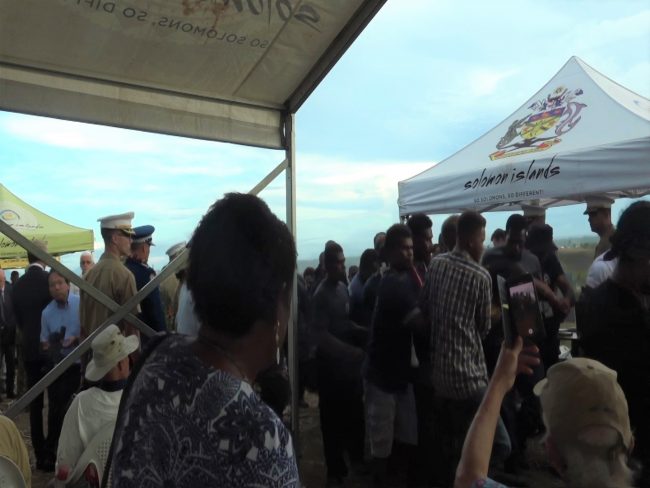 A psychiatric doctor has identified the attacker as one of their patients and informed the police that he took his last medication since March.

Like any other public official programs, locals are not restricted from witnessing them.

The attacker was one of the locals who joined and witnessed the service. The service was a peaceful and emotional program and it is unfortunate that this incident occurred.

The police empathise with the Japanese Embassy in Honiara over the unexpected incident.

Police urged families who look after mentally ill family members to take good care of them and to ensure they completed their prescribed medical requirements.

Members of the public who are aware of those who present risks to the public are encouraged to help protect public safety.

The reconciliation was attended by the Permanent Secretary of the Ministry of Culture and Tourism Bunyan Sivoro and his staff, staff from the Ministry of Foreign Affairs and External Trade, Japanese Ambassador to Solomon Islands His Excellency Yoshiaki Miwa and media personnel.

Mr Sivoro presented shell money to Ambassador Miwa as a symbol of peace which the Ambassador accepted.

The three captains. pictured here, pleaded guilty in court. State prosecutors will push for the maximum penalty - either a $SBD12 million fine or five ... Read More