The crew of HMAS Ararat rescued 17 people including members of the Royal Solomon Islands Police Force (RSIPF) after they went missing on 20 May 2022.

The RSIPF officers were based at Kulitanai Police Station in the Shortland Islands near the common border between Solomon Islands and Papua New Guinea (PNG).

RSIPF in a statement today says, the officers with some civilians went missing after they left the Shortland islands for Gizo for work related matters. On their way back to Kulitanai Police Station they had some problem which is currently under investigation to determine its cause.” 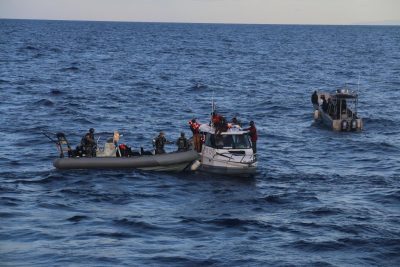 “The stabbi left Gizo and did not arrive at Kulitanae Police Station as expected. Police Response Team stationed at Taro, Kariki and Harapa went out to do an initial search till late at night but there was no sighting of the missing stabbi craft,” Assistant Commissioner (AC) National Operation Everlyn Thugea says.

AC Thugea says, the search rescue continued the next morning on 21 May 2022 until late in the afternoon when the missing stabbi craft was finally tracked and rescued by an Australian Navy vessel.

“Information was sent to the Australian HMAS Ararat and they picked up a signal from the stabbi craft and managed to rescue the drifted stabbi 12 Southeast nautical miles outside of Pirumeri Island in Shortland Islands,” AC Thugea says.

She acknowledges and appreciates the continued assistance and great support from Australia with the help of HMAS Ararat.

“Your help has saved many lives. I would also like to thank stakeholders like Maritime Rescue and Coordination Centre (MRCC), Heli Support and the Forum Fisheries Agency (FFA) for your support in the search and rescue for our missing officers,” Thugea adds.

“I would like to extend my appreciation to our Police officers who have been working tirelessly in carrying out the search and rescue till the missing stabbi was safely arrived at the Kulitanae Police Station,” says AC Thugea.