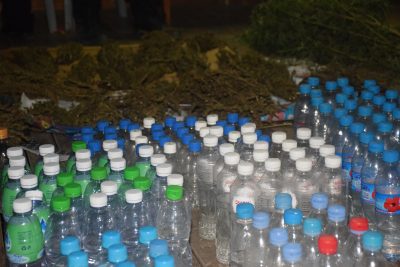 Kwaso (home-brewed beer) and dried Marijuana confiscated by RSIPF in one of its raid at White River. Photo: Police File

The raid happened on 5 May 2022, at about 4 and 5pm with the assistance from the RPNGC, according to the Supervising Provincial Police Commander (PPC) Honiara City Police, Superintendent Jimson Robo.

It was jointly carried out by White River Police officers and RPNGC .

Superintendent Robo says, “The snap operation raid was successfully done with the assistance and support from the concerned elders, leaders and Chiefs in the community as they are really concerned about the ongoing illegal kwaso and marijuana activities in the area.

Mr Robo adds, “Elders concern that it will increase the anti-social behaviours, had bad influence on youths and affect their lives. ”

There was no possible arrest made as upon police arrival the suspects already left the targeted location. Twenty 1.5 mineral bottles containing kwaso were confiscated and marijuana plants were uprooted.

Tovosia to Wale: Necessary procedures will be taken on deep sea mining

The government will carry out all necessary procedures needed and required before any deep-sea mining activities can take place in the country. This is according ... Read More