The Police Response Team (PRT) of the Royal Solomon Islands Police Force (RSIPF) deployed less lethal ammunition for tactical withdrawal from area of operation in East Fataleka after heavy attack from villagers, Police say in a statement this afternoon.

Police deny reports that about 20 PRT officers have entered the village and discriminately fired tear gas to the village.

It said PRT executed a covert operation at 5am on Thursday 17 March 2022 at Bethel Village, East Fataleka in Malaita Province to arrest Noxley ATU who has evaded police arrest in numerous occasions for his alleged involvement in the recent unrest in Honiara on November 2021. 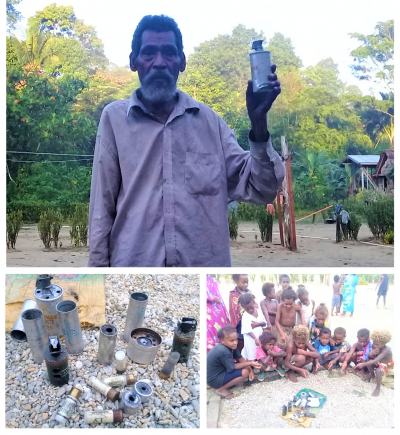 It said PRT were at that location condoning the house of the suspect when the villagers were alarmed and came out in numbers and attacked the PRT team with dangerous weapons such as spears, stones, slings, bows and arrows, etc.

The PRT team deployed less lethal munitions (smoke) to protect themselves and tactically withdraw. Despite that, the villagers men, women and children continued to attack the PRT officers until they boarded their transport.

The RSIPF condemn in strongest terms the unprovoked attacks made by the villagers of Bethel towards RSIPF members who are there lawfully executing their duties as mandated to them by law. Communities are urged to respect the law and stop interfering with Police officers executing their duties, which is an offence under the law.

RSIPF deny claims made by media that about 20 PRT officers have entered the village and discriminately fired tear gas to the village. This report is false. A PRT team of eight officers only discharged the less lethal munition when the villagers attacked them.

PRT only discharges the less lethal munitions in the location of the suspect’s house, which is situated in the far end of the village and outside of the village when the villagers follow them and attack them on their way to their boat.

RSIPF Commissioner Mr Mostyn Mangau says, “In any police operation, when there is a greater risk tactical commanders have to make some critical decision to protect officers on operation. This is a normal police operation where use of tactical options are there.”

Commissioner Mangau says, “The suspect has already escaped prior to the PRT arrival in the area of operation and I call on the suspect to surrender himself to police.”

“The villagers have already been waiting for PRT and attacked them with dangerous weapons such as slings, spears, bows and arrows on their arrival.”

Mr Mangau says, “The arrest team were attacked from every direction and they had to apply tactical options to restrain in self-defence for their safety as the whole community overran them but with their experience and trainings they tactically managed to withdraw unhurt.”

“Police will not give up in coming to arrest you, therefore the best decision to make is  surrender yourself to any nearest police station,” says Commissioner Mangau.

The Police Chief says, “If community is not happy with police actions of the PRT officers then the Professional Standard Internal Investigation (PSII) office is there to lodge your complaints for further investigation.”