“RSIPF would like to clarify to the public that there is no secret gun shipment coming into the country on-board a logging vessel as reported by Alfred Sasako on Solomon Star issue number 8081, dated on 10 March 2022,” Police stated in a statement this afternoon. 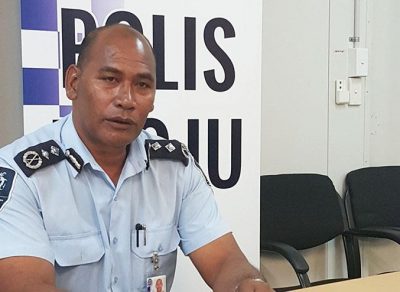 Police Commissioner Mostyn Mangau made this statement after an investigation was conducted by RSIPF into this particular media information.

“The only related cargo coming into the country as known by RSIPF at this time is the police aide training equipment (replica or plastic rifles) and riot equipment donated by the Peoples Republic of China (PRC),” Commissioner Mangau says.

The training equipment are kept at Rove Police Headquarters after cleared by Customs on arrival.

“I would like to acknowledge and honour the ongoing support and assistance provided by our bilateral partners in building and enhancing the capacity and capability of the RSIPF in its efforts to tackle and stay ahead of the security threats and challenges in this country.”

He said such commitments help the country in contributing strategically to fortify its regional and international commitments such as the UN Peacekeeping Missions.

“I would very much welcome any other bilateral partners who wish to come forward to modernise the RSIPF to do so, as crime and security challenges are fast evolving over time – threatening the lives of our people. It is only through such commitments and cooperation that we can be able to reap the benefits of prevailing over all forms of crimes and security challenges we face today nationally and globally.”

Commissioner Mangau adds, RSIPF will continue to strengthen the interoperability and collaboration with all Law Enforcement Agencies (LEAs) in the country and with external security agencies to ensure no such dangerous weapons or illicit goods are smuggled or illegally imported into this country.

“It is only acting in unison by all LEAs that will help us to be strong to protect and keep this nation safe. Solomon Islands is a member of INTERPOL and RSIPF INTERPOL National Central Bureau (Honiara NCB) is working with 195 police forces around the world 24/7 in sharing crime and intelligence information for the purpose of keeping our borders and countries safe.”

Mr. Mangau appeals to the media to share such information to relevant authorities as soon as possible for the purpose of proper investigation and verification rather than putting it on the media, which may only cause unnecessary fear to the public.

“We must all share the responsibility of keeping the peace, safety and security of this nation,” Commissioner Mangau said.