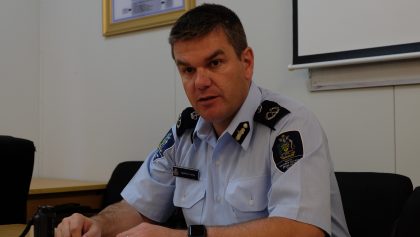 Police Commissioner Matthew Varley has reiterated his call for people not to take the law into their own hands in response to the current political instability in the country.

At his weekly media conference today, the commissioner said the police force is monitoring the security and political situation in the country following the no confidence motion on Monday.

Mr Varley said there are meetings at least twice daily to discuss the situation.

“We’re holding a senior executive briefing on this issue every morning because we have a large operation in place with many different aspects to make sure that security and peace and stability is preserved,” he said.

Mr Varley advised the public that police will not tolerate any anti-social behaviour, illegal activity, or threats of violence that would impact the safety of citizens or politicians.

According to the commissioner, there have not been any incidents of disturbance or security risk related to the political situation in Honiara or the provinces.

“But that does not mean we take the matter lightly,” Mr Varley said. “At this point in time, I can say that we are watching and patrolling the streets of Honiara very closely.”