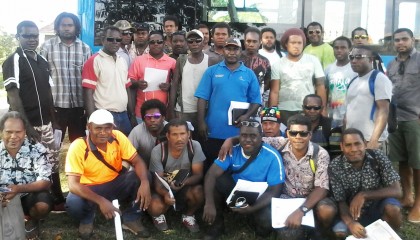 The specialist training was provided by the Community Resilience to Climate and Disaster Risk Project (CRISP) within the Ministry of Environment, Climate Change, Disaster Management and Meteorology.

Held from 20-24 July at the Solomon Islands National University (SINU), the training focused on a system of Community Vulnerability and Risk Management.

CRISP Officer Gareth Quity said the training will enable RDPcommunity helpers to conduct risk assessments in terms of climate change and disaster risk, on sub-projects that communities want to take up.

The assessment will be carried out during the planning phase and findings incorporated into RDP’s sub-project plans.

Assistant coordinator of the RDP Component One, Freda Siwainao said this will ensure that the best location is selected to build community sub-projects, taking into consideration climate change and disaster risks.

He said in the long-term, this will help the sustainability of the RDP infrastructures on the ground.

Meanwhile, the Technical Community helpers also received training on how to provide climate change and disaster awareness talks to communities.

The CVRM training was a component of a 16 week SINU training for RDP’s technical community helpers.

CVRM is a technique that has been developed by CRISP during its community consultations as part of the project’s work in building the resilience of vulnerable communities to climate change and naturaldisaster.

A taro garden in Sikaiana. Photo credit: SIBC. Communities in Sikaiana are in desperate need of food and medicine, and a Sikaiana community leader in ... Read More