The Right Reverend Vunagi officially sworn in as Governor General 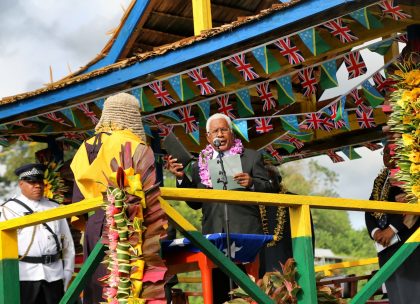 Reverend Vunagi took his oath of alliance and office to be the next Governor General of Solomon Islands for the next five years in accordance with Section 29 of the Constitution before his Lordship- the Chief Justice Sir Albert Rocky Pama during country’s 41st independence Anniversary celebration at Lawson Tama today.

Prior to this, the Attorney General Gilbert John Osmond Muria Junior prescribed the official appointment and the Royal Commission of our new Governor General effective on the 7th of this month.

His Excellency David now becomes the Country’s seventh head of state, and the first from Isabel Province.